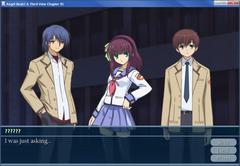 A third view is based around a character called Inochi Ushina who isn't in the SSS, the character plays the role as someone who sees the Angel Beats! story from a third person perspective. Unlike everyone else he isn't one to believe in God, and has ‘regretted something he would never forgive himself for in his past life. The story basically goes through the whole Angel Beats! main story line in the background etc, as he tries to live his life like normal in that world. Story is less towards open paths and more into trying to discover what happens to the main characters around him during all of the events that took place in Angel Beats!, multiple choices leads to him either getting involved with the SSS or not bothering to do anything at all. This projects visual novels will be released in a series of chapters, every month or two one chapter is released and so on.

Changes Made: - Fixed spacing issue (most of it) if you see it just say so in the traceback section. - Smoothed avatar's for better quality. - Avatar box matches with the frame/window. - Graphics are in contrast with Back ground. - Added full menu on main game. 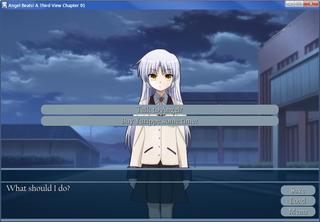 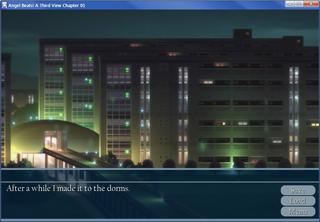 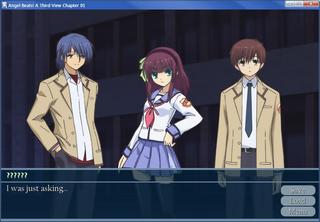