This visual novel started as a test of Ren'Py 6.11.2. You may notice some of the Ren'Py tutorial in the very beginning. This visual novel was initially called "firstproject", but was later renamed "Searching for Mio", then later to its current title, "The Petty Parody". Its current name was inspired by alliterations used by the Lemony Snicket books, who my friend loves greatly. The name "Mio" was inspired by Akiyama Mio from the popular anime series K-On!. Throughout its short development (a few weeks or months with short intervals of time spent haphazardly), The Petty Parody had no real direction. I just went with what seemed to fit, while still making the game somewhat amusing. A key source of inspiration for much of the game's dialogue comes from "The Fucking Question", a parody of the Ren'Py game "The Question". This game, until very recently, was complete crap. I asked a friend of mine, who had beta-tested before, and he suggested that I add more meta-jokes. I began to add some more meta-humor, and eventually ended up rewriting a large part of the game. The game is now in a completely different state than it was before his suggestion, so I thank HuckleberryPie greatly for his suggestion. Thanks for playing The Petty Parody! If you have questions or comments about this visual novel, please feel free to contact me on Twitter @zombieramen. 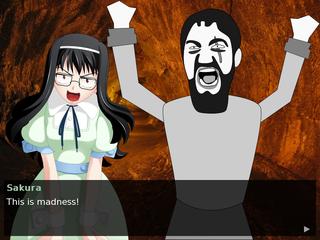